We have never been to Morocco, needless to say tried their cuisine. Last weekend, out of curiosity, we’ve tried Moltaqa Moroccan Restaurant. It was an exotic and pleasant experience.

Because we have never tried Moroccan food, we cannot tell if it is authentic. Moltaga is well known for the tagine and pastilla. Based on my brief research, Tagine is a stew prepared in a earthenware (with a chimney-like). Pastilla is a pie, sweet on the pastry and savory in the filling. 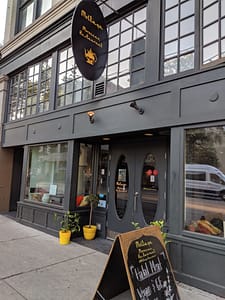 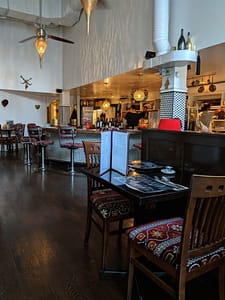 We arrived at the restaurant, and were confused the differences between the interior and exterior. The interior decoration looked like a movie set of a restaurant in Africa. I particularly liked the high-ceiling with uniquely looking ceiling fans, lights, patterned tiles and even a bong. We felt like we were teleported into another country.

The menu in Moltaqa is small; on the contrary, we were puzzled with the choices because we had no idea how to order. Rather than Googling every single dishes, we asked our server to randomly picked her favorite for us instead.

The aubergine (eggplant) is interesting, it is similar to antipasti with stuffed red pepper and walnut. The tangine is a big pot of stew with potato, carrot and a variety of spices like curry, and paprika. Fish tangine was salmon based. While tangine were good, I found the meats were overcooked. Particular the beef and they were tough and not edible after a while. Chicken pastilla was a flaky pastry wrapped with shredded chicken meat. It was sweet with cinnamon on the surface and savory on the inside. It is similar to the Asian bun with chicken meet inside. Dessert weren’t that great, the cakes were dry and small.

Throughout the few hours there, we received nothing but great service. Our server took care of us by introducing each dish and showed us how to eat them. We really enjoyed our time there because of the ambience and the beautiful belly dancing on the weekend. The belly dancing happens on the weekend around 8pm and generally run for about 30-45 minutes. Patrons are welcome to join the dance and the dancer is very pretty and rhythmic.

Although the meal was a hit and miss, I blame myself because I might not fully understand Moroccan cuisine. The ambience, colorful music and dancing makes me want to re-visit this place again in the future.