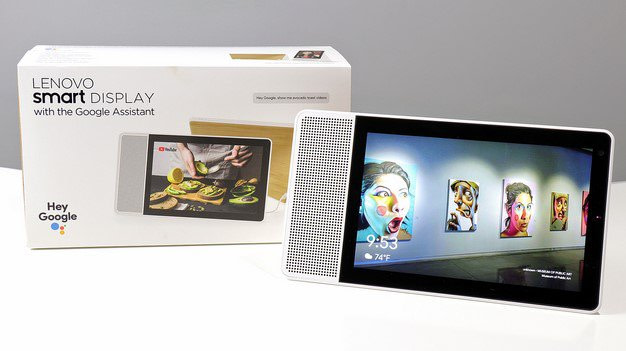 Finally the Lenovo Smart Display 8″ is available in Canada, but the 10″ model is still currently exclusive to the US market. I picked up this unit at BestBuy US, it came to about $100 after discount before Black Friday.

Since Google introduced the Home Hub platform, Lenovo is one of the first partners to produce a third party product. The Smart Displays from Lenovo comes in 8″ or 10″, both are identical in specification except the 10″ has a display of 1920×1080 and comes with wood color finish. I easily decorated my 8″ with wood color finish for less than $2. ????‍♂️ The 10″ was on sale for $150, value wise the 8″ is much better.

Compare to the Google 7″ Home Hub, the Lenovo version is bigger. They also have a camera with manual shutter for privacy, the camera is primarily used for Duo calls. The front firing speakers on the Lenovo also makes it a great wireless Google Cast speaker. 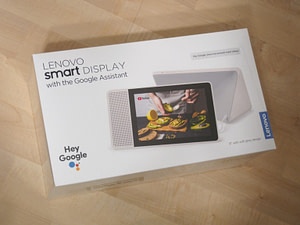 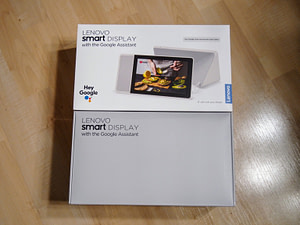 Surprisingly, the Smart Display has a very clean white packaging. It borrows the design from Google and the outer shell is a sleeve; once the sleeve is removed, the box contains the actual hardware also plain grey as well. The security seal will reveal “void” once it is tempered with in case you don’t want a previously opened unit. Opening the box, I can see the oddly shaped device is sitting in the middle surrounded by foam like protection.

Since it is using the Google Home Hub platform, setting up the Lenovo Smart Display involves using the Google Home app. I will address some oddities later on between using iOS and Android Pie. I just had to click on the “Add” button, my phone scanned the nearby area for the device and it was presented to me. I clicked on the Smart Display name shown on the its screen and it walked through a few setup steps like wifi, data sharing, Google account etc. It is very self-explainatory, if one has gone through a Home or Home Mini, it’s the same. My device shipped with an older version firmware and it automatically updated to v3.6 (current is v4.40).

Once the Smart Display was setup, the app prompted me to setup “Ambient” mode. It is like a wallpaper when it is idling and it defaulted to “Pets and People” in my Google Photo albums. I was asked to add music and video services like Spotify or Netflix etc.

Since the device supports Google Cast, I can cast audio and video wireless to it. The audio output from the built-in speakers were quite powerful to fill up my kitchen. It definitely sounded more direct than Google Home as I find it kind of muffled. It sounded crisper than first generation Echo in my living room.

One of the amazing thing I find Google Home/Mini/Smart Display over my Echoes is the reception of my voice. The Echo seems to have trouble hearing in environment with some ambient noises. Both the Smart Display and Mini could hear my from 15 feet away. Similar to the Alexa, when more than 1 device detects my voice, only the closest one will response.

The display on the Smart Display is unbelievably vivid. It was bright even under the window and the viewing angle was quite wide. For a device sold for under $100, the display output alone is fantastic. There are some glare but it is expected from a glossy display. At the edge of the display, there is a camera and microphone; both come with manual shutters for privacy. ????

One can say that an Android tablet with Google Assistant can achieve the same purpose of the Smart Display, however I don’t think $100 can get the great hardware and first party support from Lenovo and Google. As of this writing, firmware version 4.40 was pushed to introduce more features. I would say the Home Hub or Smart Display is Google Assistant with a display. The idea is to visualize Google Assistant to give similar experience with the Pixel devices.

In terms of usage, the Smart Display is visible on iOS and Android. I noticed using it on my iPhone, some of the Smart Display setting like choosing a photo album did not show. The settings to change volume or accessibility did not “stick”. ???? These problems did not happen on the Android version.

I think the Lenovo Smart Display and Google Home Hub is a great addition to those who have been deeply integrated into the Google ecosystem and is using Google Assistant actively. It doesn’t bring a lot of new ideas to the table, but having a screen and being able to cast to it is welcoming. I am using mine in the kitchen so that I can watch some video or Netflix with voice command.

I only wish I can install apps, use it as a control panel for Smart Things and use it as a remote camera. It would be perfect. And yes, I am slowly migrating my voice assistant from Alexa to Google.

I didn’t like the white backing, so I was being creative and put on some adhesive covering to it. ????