If you are into the art of making a cup coffee, this is for you. Aubade is a vegan cafe.

We bumped into Aubade Coffee during our walk in Chinatown, after our yummy visit of Fat Mao Noodles. Aubade Coffee was once mentioned to me by Rachael, the owner of Zenstone Coffee. It was memorable because I was told the cafe is part of an antique shop; as I happened to walk by a lighted sign saying “COFFEE SO GOOD, IT WINS FOOD AWARDS!” AND within an antique store. 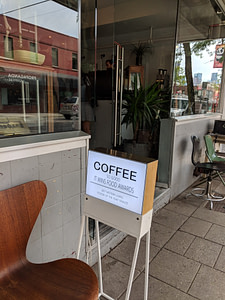 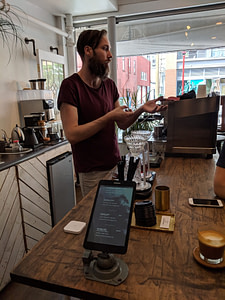 Rachel also told me the owner here won many awards on Aeropress and pour-over, yet he doesn’t charge a premium for his drinks. I was a little hesitant when I saw the bright, down-to-earth decor, thinking it would be like $10+ for a cup like another cafe in Richmond. I walked into the store, looking lost. The owner, Eldric welcomed me into his little “corner” and showed me the menu on his tablet.

The cafe is located at the front of an antique shop called Space Lab. The shop design is quite unique, it features a modern, bright entrance, all glass door store front (where the cafe is); a little further in, one will be surrounded in all the old, classic, vintage antiquities from small to large. The cafe uses tables, sofas and other props within the seating area. It offers a casual, relaxed feel. The seating area may seat about 10 people, but it should not be packed like a Starbucks.

Calling Eldric’s shop minimalistic is an understatement, he literally has a few pieces of equipment (espresso machine, couple Hario V60, M3 grinder, Bonavita and Fellow electric gooseneck and a tall cold drip hiding behind the counter). From the way the shop is setup, this shop specializes in pour-over.

As I was scrolling through the menu on his tablet, Eldric was preparing his pour-over for other customers. At the same time, he was enthusiastically describing to me the various characteristics of the beans he has. Although he only offers a few in the menu, the choice was clear to me – Minamihara – Brazil. The grind smells nutty with fruity sweetness.

Looking at Eldric preparing a drink is unlike looking at a cafe barista. Since he is the winner of the Canadian Brewer’s Cup, I feel like watching god making his creations ????. I asked for my coffee to be aero-pressed because it was his best, and I could learn something. Eldric wasn’t shy talking about his process and his winning recipe – really in coffee is about repetitions and consistencies. From his pre-infusing the aero-press, making his grind through the M3 and dosing into the aeropress, one can tell he is very knowledgeable. Just he is free-styling it like watching an acrobat performing. It seems so natural and effortless!

The Versalab M3 grinder is a purpose built belt-driven grinder for small dosing. It uses both flat and conical burr, the result is the highest retention of the beans’ characters. The grind that comes out looks more granular and does not crump. This is the “artisan” grinders of all.

When I was paying close attention to Eldric, I asked many questions. The way he did a few extractions in very small quantity, and one larger extraction at the end. He would scooped out the crema on each extraction. He explained that this winning recipe allows him to extract the various flavors of the bean during the first few extractions as different chemical comes out at different stage ????. He also told me he made his own filter paper because his paper would make a brighter, cleaner, less bitter coffee. He then further explained to me the misconception of crema, the gas (chemical reaction) during the extraction is really not desirable. At the end of the extraction, he take a few tea spoon of each small extractions and put them into the final larger extraction – a tea like clean cup of coffee was presented in front of my eye.

The first sip was sweet, as it went further, it was nuttyish-chocolatey. While I could not taste the distinct of rhubarb tart or plum. There is a hint of sweet fruits. Personally this is one great cup of coffee that is similar to the 100% Kona done over siphon. The clean, bright flavor makes this easy drinking, even for non coffee drinker. It also has a great body with pleasant after-taste that lasted for hours.

My wife ordered a cup of iced latte, which was made of plant-based milk (mix of rice, soy, coconut, almond and hemp). Eldric says he adjusts the proportion of each milk based on the changes of the beans. I got a few sips before my wife finished hers, and I was less impressed with the latte. The vegan milk is too strong that I could not taste the espresso. I hope the espresso could be a freshly pulled shots rather than a prepared one.

Coming to Aubade Coffee is a learning experience. This is a place for those who appreciate a award winning cup of bright tasting coffee in a slow-bar environment. The friendly service, expertly crafted coffee in a lay back antique store leaves a unique classy impression in my mind.