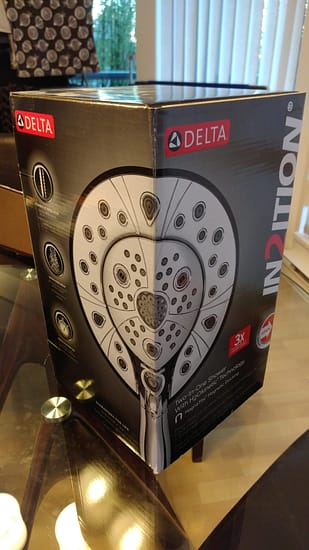 My wife keep complaining the Waterpik shower head we are using keeps falling down from the holder, I have to admit it’s head heavy and it could have fallen onto her head ????. So I have been looking for an inexpensive and suitable shower head upgrade. After some researching for a magnetic shower head, I have come down to this Delta Magnetite model or the Moen Magnetix.

This particular shower head has 3 different part numbers for the same thing:

The MSRP is USD$200, in my opinion is way overpriced. Smart consumers will shop around and interestingly Home Depot and Lowes exclusive models are being sold for less. I pick mine up at Lowes since they have it in stock for $94. Amazon also has the 58480 for $147. 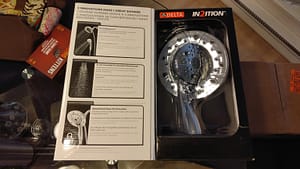 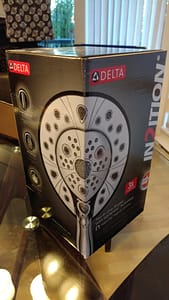 First impression is, “what a huge box!”. Indeed the unit is big, upon checking the content, the excitement drops because the construction of the whole thing is plastic. For a MSRP of $200, I would expect more metal. This feels lighter than the Waterpik that I am using. Regardless, Delta chooses to use plastic possibly to reduce the weight on the shower arm.

Assembly is relatively simple, it comes with gaskets already installed on all ends and I found an extra one in the box. I will find out if I can use that in replace of the flow restricter (later on). The instruction is only 1 page and it’s easy to follow.

This shower head has a flow rate of 2 GPM, it is relatively lower than the Waterpik which is about 2.5 GPM. One of the features of this shower head is the ability to use the shower head in addition to the handheld shower; in reality, enabling this function yields a weaker pressure. The pause button is also a nice addition because it can temporary stops the water without going to the main valve; I can image showing a pet or baby with this.

Both the shower head and the handheld shower will give a massaging function, “rain shower-like” spray and regular shower. Somehow coming from the Waterpik, this Delta shower head doesn’t have a concentrated stream of water. Rain shower function is not even comparable to a regular rain shower head as the water droplets and speed feels like a garden hose instead. It just doesn’t feel very satisfying. This is also why I will look into removing the mesh restricter to find out if the pressure can be increased.

The magnetic docking system is easy to use and it will stick as soon as it’s about there. If I want it to be secure, I have to ensure I line up the head and push in to hear a click.

This shower head solves my problem. I am still not convinced it should be that weak, however, given it is 2GPM, I don’t think I should complain too much. If I have to spend full price on this, I will look into something else.

Removal of flow restrictor
To remove the flow restrictor, it’s merely using a pair of needle nose pliers to pull the purple plastic piece out on the end where it connects to the shower flange.